The Graduate Guide to Outdoor Dining

Graduate Hotels brings unique, handcrafted charm to everything we touch, and our outdoor spaces are no exception. Read on to discover some of our favorite spots made for sunny season.
Now Streaming Handcrafted Hotels - Blog Post
04 / 15 / 2022

Graduate Hotels was the official hotel partner of The Boat Race 2022 – the annual battle between Oxford and Cambridge rowing teams on the River Thames. Check out the recap video from the event.
Silence Is Golden - Blog Post
04 / 12 / 2022

At Graduate Hotels, we’re suckers for a good book. That's why we’re so hyped about our partnership with Silent Book Club to bring their signature events to 15+ Graduate Hotels this spring.
Extra Credit:
How To Be A Comedian 101 - Blog Post
04 / 10 / 2022

Extra Credit:
How To Be A Comedian 101

Graduate Roosevelt Island hosted a comedy event with the folks at Whalebone magazine in our first-ever Extra Credit event.

Stop by any Graduate Hotel and you’ll see – we’re suckers for a good book. From book-centric lobby designs at Iowa City and Roosevelt Island to custom bookshelf wallpaper in Providence guest rooms, you’ll always leave feeling well-read. That’s why we’re so hyped about our partnership with Silent Book Club to bring their signature events to 15+ Graduate Hotels this spring.

Started by a few friends in 2012, Silent Book Club offers book lovers the opportunity to get together and read whatever they want in comfortable silence; no discussions, no assignments, no pressure. We know, best idea ever.

Since you’ll need stellar new reads to bring along, we thought it’d be fun to pass on some #bookspo with Graduate flair. Read on to discover three incredible authors with ties to Berkeley, Minneapolis and Cambridge, United Kingdom – all hotels that happen to be hosting Silent Book Club events, FYI. 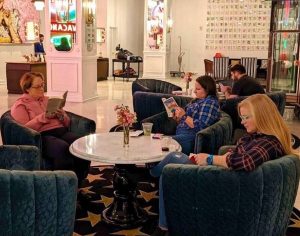 Home to its fair share of free spirits, UC Berkeley counts novelist and short-story writer Jack London among famous alumni, despite only attending for about a year. The Call of the Wild, his lauded debut novel published in 1903, chronicles the grueling reality of life during the Klondike Gold Rush. London went on to become one of the first American authors to gain international fame and fortune from writing.

Best known for American classics The Great Gatsby and The Curious Case of Benjamin Button, author F. Scott Fitzgerald was born and raised in the Twin Cities. Fitzgerald coined the term “Jazz Age” and his work is still seen as a masterclass in depicting the charming excess of the Roaring ‘20s.

While studying at King’s College Cambridge, author Zadie Smith attracted a publisher’s attention and eventually landed a contract to publish her first novel, White Teeth, in 2000. Ever since, Smith’s fearless writing on all things class, culture and current events has topped bestseller and prize lists around the world.

Now that you’ve got a fresh rec list, check out the upcoming Silent Book Club schedule and head to your nearest participating Graduate for a night of peaceful perusing.